Thank you for the tour, Talking Rain! 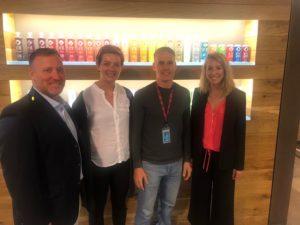 The Yes! to Affordable Groceries coalition announced that the Washington Secretary of State has formally certified Initiative 1634 for the November 2018 ballot giving the voters the opportunity to make their voice heard on keeping groceries affordable. More than 1,000 small businesses have joined with farm bureaus, labor organizations, Chambers of Commerce and Washington residents to support I-1634 to protect our state from taxes on food and beverages. 381,479 signatures were submitted in support of I-1634, the Yes! To Affordable Groceries Act on July 6. The Secretary of State’s office examined a random sample of the signatures and found a validity rate of 82%, indicating that the initiative would meet the constitutional requirements to make the November ballot. Initiatives need at least 259,622 signatures to make the ballot.

“Initiative 1634 has generated such a strong and diverse base of support because voters are legitimately concerned with the rising cost of living and a regressive tax structure that are hitting families and independent community businesses the hardest,” said Jeff Philipps, coalition member and President of Rosauers Supermarkets.

While the Washington state government doesn’t currently collect taxes on food and beverages, there is a loophole in the law that lets local governments impose taxes on groceries. Grocery taxes hit working families the hardest, and cost the state jobs in a vital part of our economy. The Seattle City Council exploited this loophole in 2017 to pass a tax on beverages. The tax raised beverage prices astronomically, but prices on other products also went up as business owners worked to implement the complicated policy. There’s nothing to stop other cities and towns from doing the same thing with any grocery items.

I-1634 will close this loophole for any future new taxes on food and beverages. It does not reverse any taxes or revenue streams that currently exist.

We see local governments faced with budget challenges that are now considering revenue sources we wouldn’t have thought possible a few years back. For family farms and our farming community, taxes will undoubtedly take a toll on Agricultural viability and therefore cost local jobs and hurt farmers and ranchers, like me, ability to do business. There needs to be a better way to fund our priorities – we need to draw a line to keep groceries affordable and free of new taxes,” said April Clayton, coalition member and Vice President of Chelan/Douglas County Farm Bureau.

Head over to My Northwest to read the article.

Working-class families and low-income and minority communities are among those feeling the greatest impact from the beverage tax as it worsens the income inequality throughout Seattle. The 1.75 cents per ounce tax on sweetened beverages was intended for distributors of the products, but customers are also noticing the price increase.

Keep Seattle Livable for All, a coalition of local small businesses and Seattle residents urging the City Council to consider the damaging effects of such an intrusive beverage tax, is working to support small business owners voice their concerns over the unfair beverage tax that is having detrimental impacts on their business.

German Arias of El Farol Mexican Restaurant stated, “My brother and I have worked within this business for over 30 years and this beverage tax has only added to all the other costs that we now have to face. We’ve had no choice but to raise our prices.”

Businesses that are noticing the impact the most are those near the Seattle border, as customers are making their way outside city limits to buy their beverages. The Seattle Times  interviewed a small business owner near a city border who stated, “It’s near impossible for me to sell this now. They go over there, one block away, and there’s no tax.” This is just one of the many examples of customers taking their patronage to locations where there aren’t increased costs due to a beverage tax.

On January 1, the City of Seattle put into effect a new city-wide drink tax that will enforce distributors to pay 1.75 cents extra per ounce on soda and sugary drinks, driving up prices for consumers and worsening income inequality in Seattle.

Neighborhood businesses faced with the new tax are mostly small businesses, restaurants or conveniences stores with owners who are worried about their businesses’ bottom line. The tax predominantly impacts working-class families and low-income consumers, overall worsening the income inequality across Seattle.

The newly enforced tax was passed in June 2017 by the Seattle City Council and will not include diet drinks and sweetened products from certified manufacturers with an annual worldwide gross revenue of $2 million or less. Products from certified manufacturers with similar revenue of more than $2 million but less than $5 million will face paying a 1-cent-per-fluid ounce tax.

The tax is intended for distributors of the products, but will impact customers who will likely see a price increase on their receipt when they purchase most beverages including sports drinks, energy drinks, soda, and juice boxes. However, there has been increasing confusion among consumers and business owners about which sweetened beverages are taxed. For example, milk is the determining factor for coffee-shop beverages and certain grocery products. According to Seattle’s Finance and Administrative Services Department, products with milk listed as the first ingredient are exempt from the new tax.

This unfair beverage tax will hurt Seattle small businesses and potentially cost employees their jobs. Visit Keep Seattle Livable For All for more information and ways to share your voice regarding the damaging effects of the newly imposed tax.

As an industry, we are committed to ensuring customers have the information they need to help them find balance. As a part of this commitment, America’s beverage companies announced the Clear on Calories Initiative in 2010 in support of Michelle Obama’s “Let’s Move” anti-obesity campaign. This initiative added easy-to-understand calorie labels on the front of every bottle and pack. In 2012, the intiative was extended to vending machines as part of the Calories Count Beverage Vending Program, putting the same labels right on the vending machine buttons.

Clear on Calories is yet another example of our commitment to arming consumers with the information they need to make choices that are right for them. We know a key factor in helping families to live healthy lifestyles is through balancing what you eat and drink with physical exercise. In addition to Clear on Calories, our industry has also launched several other efforts such as the National School Beverage Guidelines, Balance Calories Initiative, and the push to provide more low sugar options as a way to bring more choice to consumers so that they can make decisions that best suit them and their families.

On Tuesday, October 10, the Cook County Board of Commissioners Finance Committee

passed the ordinance to repeal the sweetened beverage tax. The measure was passed by the full Board

of Commissioners on Wednesday, October 11 by a vote of 15-2. This ordinance repeals a measure

narrowly passed by the Board of Commissioners last year (November, 2016) imposing a penny an ounce

tax on sugary beverages. That tax, which had no direct voter input, was implemented at the beginning of

the calendar year 2017. Reports cite voter pressure and pushback on the measure as reasons behind the

Update on Seattle Soda Tax: On June 6, 2017, the Seattle City Council approved a new tax on soda and

other sugary beverages. The measure, originally proposed in February by then-Mayor Ed Murray, will

implement a tax of 1.75 cents per ounce on soda, sports drinks, energy drinks and other sweetened

beverages. The city government is currently finalizing rules for the implementation of the tax that is

scheduled to go into effect on January 1, 2017. As was the case in Cook County, the Seattle process

bypassed a public vote and was enacted by a vote of the city council.

Update on Sweetened Beverage Tax in Other Cities/Counties:

remorse in cities and counties that have considered and/or are imposing a tax, particularly in areas

to the Seattle beverage tax. The coalition remains concerned with the implementation of the Seattle tax,

communities. The coalition believes imposing another tax on Seattle residents simply adds to the pain of

those already reeling from the city’s skyrocketing cost of living. While the previous administration may

have supported such a measure, the current mayoral candidates have expressed opposition to the tax.

As part of the Seattle Times candidate profiles, when asked if they approve of the new sugary drink tax,

It’s summertime and there is nothing more satisfying then spending time outdoors and enjoying your favorite beverage. No matter what you’re looking for in a beverage, our beverage companies offer a wide variety of choice to customers including a vast selection of low-and no-calorie products that taste great. These types of products are great options if you are trying to cut calories or maintain a healthy weight.

To learn more about how our beverage companies are providing choice to customers, visit BalanceUS.org.

This tax disproportionally targets low-income and minority communities by pricing hundreds of different beverages out of their reach, while exempting other drinks such as diet beverages and espresso. As a result, those who can afford this tax the least will be hurt the most.

Despite the health claims the City Council uses to justify this new tax, there’s actually no evidence that similar taxes elsewhere have improved public health. Instead, the evidence is clear that this type of regressive tax only hurts the community and drives up the cost of living.

According to a draft of the legislation released by Mayor Ed Murray’s office, the proposed “Sweetened Beverage Tax” would assess a tax of 1.75 cents per ounce on a broad range of sugar-sweetened beverages – including energy and sports drinks, juice drinks, sweetened teas and ready-to-drink coffee drinks – as well as beverages with no sugar at all, and syrups used in many popular coffee drinks. The tax would not apply to 100-percent fruit juices or sweetened milk-based products, many of which contain as much or more calories from sugar.

Although 1.75 cents per ounce might not sound like much, the mayor’s office estimates that the tax will raise $23 million a year to fund “investments in education and food access” programs. But some estimates suggest that amount could actually be much higher, making the tax all the more harmful to the economic health of the small business community.

“This beverage tax is a business killer, especially a small business killer,” said Gurdev Singh Mann, who has owned King’s 76 in Seattle’s Rainier Valley neighborhood since 1995. “Where does it stop? The city’s spending is going through the roof. But instead of living within their budget, they just keep looking for who they can tax more.”

Under the proposal, nearly every beverage in stores would see a sharp spike in costs, with more than 1,000 beverages affected and wholesale prices increasing an average of 60 percent. Here some examples of what consumers could pay:

While the proposed tax will be levied at the distributor level, here’s how it’s expected to impact others:

Here’s what others have to say about the proposed beverage tax:

The City Council is expected to discuss the proposed beverage tax at its first meeting in May. To learn more about the proposed tax and how to add your voice to those who already have expressed their concerns about it, visit www.keepseattlelivableforall.com.

About Keep Seattle Livable for All

For more information, or to speak to coalition members quoted in this release, contact: